What is a Thread?

A thread is a path of execution within a process. Also, a process can contain multiple threads.

Thread is also known as a lightweight process. The idea is to achieve parallelism by dividing a process into multiple threads. For example, in a browser, multiple tabs can be different threads. MS word uses multiple threads, one thread to format the text, other thread to process inputs etc.

Process vs Thread?
The typical difference is that threads within the same process run in a shared memory space, while processes run in separate memory spaces.

Threads are not independent of one other like processes as a result threads share with other threads in their code section, data section and OS resources like open files and signals. But, like process, a thread has its own program counter (PC), a register set, and a stack space.

Advantages of Thread over Process
1. Responsiveness: If the process is divided into multiple threads, if one thread completed its execution, then its output can be immediately responded.

Mutexes are used to prevent data inconsistencies due to race conditions.

A race condition often occurs when two or more threads need to perform operations on the same memory area, but the results of computations depend on the order in which these operations are performed.

If register load and store operations for the incrementing of variable counter occur with unfortunate timing, it is theoretically possible to have each thread increment and overwrite the same variable with the same value.

Another possibility is that thread two would first increment counter locking out thread one until complete and then thread one would increment it to 2.

When a mutex lock is attempted against a mutex which is held by another thread, the thread is blocked until the mutex is unlocked. When a thread terminates, the mutex does not unless explicitly unlocked. Nothing happens by default.

A join is performed when one wants to wait for a thread to finish.

A thread calling routine may launch multiple threads then wait for them to finish to get the results. One wait for the completion of the threads with a join.

Condition Variables:
A condition variable is a variable of type pthread_cond_t and is used with the appropriate functions for waiting and later, process continuation.

Functions used in conjunction with the condition variable:

Waking thread based on condition:

pthread_cond_signal
pthread_cond_broadcast – wake up all threads blocked by the specified condition variable.

The logic conditions (the “if” and “while” statements) must be chosen to ensure that the “signal” is executed if the “wait” is ever processed. Poor software logic can also lead to a deadlock condition.

Note: Race conditions abound with this example because count is used as the condition and can’t be locked in the while statement without causing deadlock.

When this option is enabled, each thread may have its own scheduling properties. Scheduling attributes may be specified:

The threads library provides default values that are sufficient for most cases.

The order of applying the mutex is also important. The following code segment illustrates a potential for deadlock:

In this case, the thread management kernel is not aware of the existence of threads. The thread library contains code for creating and destroying threads, for passing message and data between threads, for scheduling thread execution and for saving and restoring thread contexts. The application starts with a single thread. 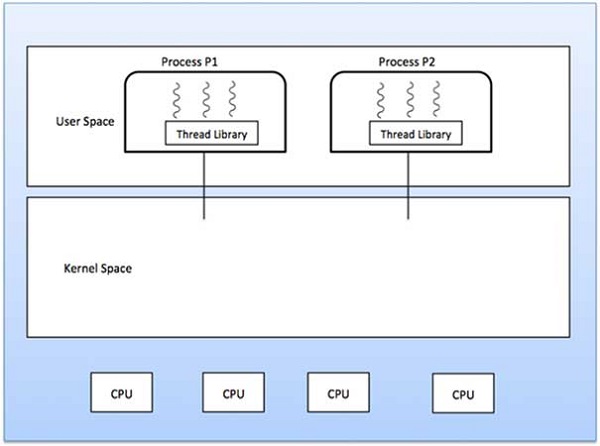 The Kernel maintains context information for the process as a whole and for individuals threads within the process. Scheduling by the Kernel is done on a thread basis. The Kernel performs thread creation, scheduling and management in Kernel space. Kernel threads are generally slower to create and manage than the user threads.

Some operating system provide a combined user level thread and Kernel level thread facility. Solaris is a good example of this combined approach. In a combined system, multiple threads within the same application can run in parallel on multiple processors and a blocking system call need not block the entire process. Multithreading models are three types

Many to Many Model

The many-to-many model multiplexes any number of user threads onto an equal or smaller number of kernel threads.

The following diagram shows the many-to-many threading model where 6 user level threads are multiplexing with 6 kernel level threads. In this model, developers can create as many user threads as necessary and the corresponding Kernel threads can run in parallel on a multiprocessor machine. This model provides the best accuracy on concurrency and when a thread performs a blocking system call, the kernel can schedule another thread for execution. 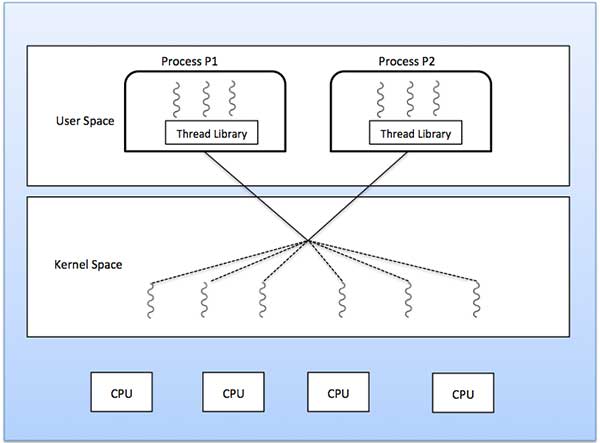 Many to One Model

Many-to-one model maps many user level threads to one Kernel-level thread. Thread management is done in user space by the thread library. When thread makes a blocking system call, the entire process will be blocked. Only one thread can access the Kernel at a time, so multiple threads are unable to run in parallel on multiprocessors.

If the user-level thread libraries are implemented in the operating system in such a way that the system does not support them, then the Kernel threads use the many-to-one relationship modes. 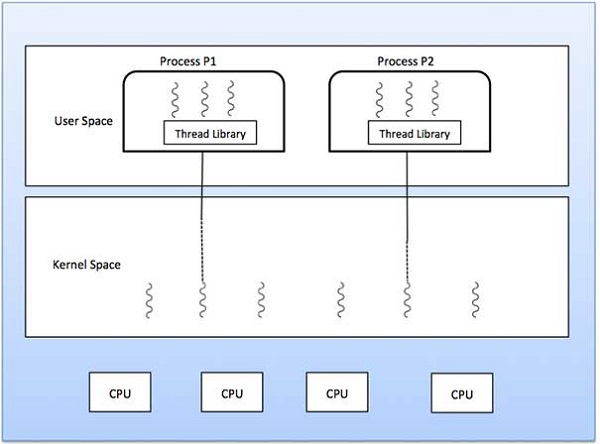 One to One Model

There is one-to-one relationship of user-level thread to the kernel-level thread. This model provides more concurrency than the many-to-one model. It also allows another thread to run when a thread makes a blocking system call. It supports multiple threads to execute in parallel on microprocessors.

Disadvantage of this model is that creating user thread requires the corresponding Kernel thread. OS/2, windows NT and windows 2000 use one to one relationship model. 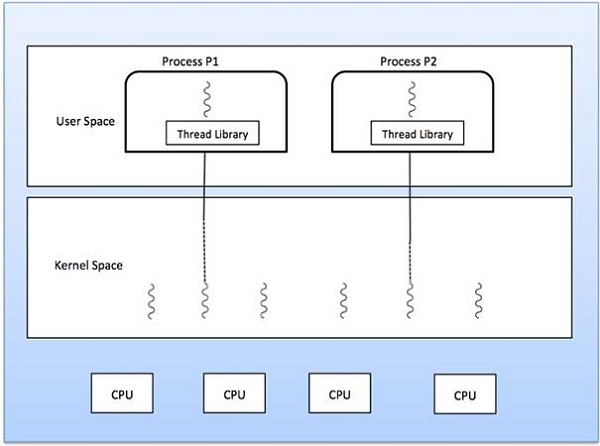